Priscilla of Boston Closes Its Doors

Sad news from one of America's greatest bridal shops... 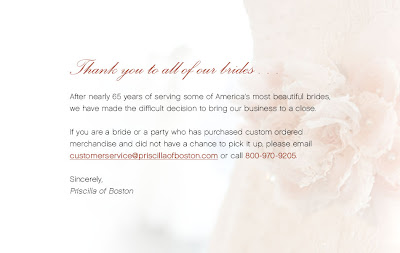 Do you think it's because of this unfortunate incident??
Priscilla Of Boston Spray-Paints Unsold Wedding Gowns To Keep Them From Grubby Poor People
By Laura Northrup on January 5, 2012

Priscilla of Boston, a high-end bridal chain best known for making Grace Kelly's wedding gown, came to an undignified end last week when current parent company David's Bridal shut it down. This news wouldn't have made national headlines if an alert shopper in a Minneapolis suburb hadn't noticed unsold dresses by the rackful being wrecked with red spray paint and tossed in a dumpster.

Yes, it's wasteful and appalling. David's Bridal claims that the gowns, most of which retailed for more than your first car, couldn't be donated due to contractual obligations to high-end designers. Worried about the "brand dilution," the suppliers don't want their brand-new gowns filling a thrift store rack, or, evidently, being worn by poor people.

“Priscilla of Boston has always donated quality bridal gowns to a variety of charitable causes. We do not, however, donate unsaleable dresses that are damaged, soiled or in otherwise poor condition.”

Your helpful bridal fashion hint for today: avoid spray-painting unworn gowns in order to keep them out of "poor condition."

David's later issued another statement to NBC's Today show, claiming that they would try to salvage some gowns for brides in need.

“While it has been Priscilla of Boston's policy not to make donations of sample dresses that are in poor condition, we recognize that some of these dresses could possibly have gone to worthy causes. David's Bridal has already begun bringing together all of the remaining Priscilla of Boston gowns to evaluate them and ensure that they are donated to our charitable partners wherever possible.”

I'm a California girl who loves LOVE. I love being a part of two people saying, "This is it...I choose YOU!" I survive on Starbucks & dark chocolate. I pride myself on being one step ahead of my brides at all times. I'd love the chance to get to know you & make the wedding of your dreams a reality!

"Working with Chelsea was a great experience for all of us. She is very easy to work with. Chelsea understood the stresses and concerns a bride & family members have when planning a wedding. She made us all feel calm. Chelsea is amazingly organized. Her correspondence with me and the bride was immediate. Her creativity and suggestions were things I never would have thought of. I would absolutely use Chelsea & From Ring to Reception for all of my future wedding planning. One son down, two to go!!"

--Kimberly, Mother of the Groom

"Chelsea coordinated a wedding I photographed. As a vendor in the industry for many years I've come to realize just how important it is to have a 'good' coordinator. It was truly a pleasure working with her as she seemed very laid back and yet totally on top of everything! I would refer her and the services that she offers to anyone--she made photographing our bride & groom easy peasy. Thank you, Chelsea!"

"Thank you for all of your help with the planning before the wedding and also the day of. You were such a pleasure to work with and Rob and I have nothing but wonderful things to say about you and all that you did. " 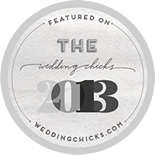 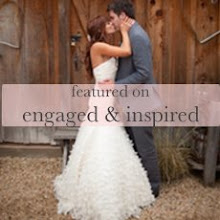 if you've liked working with me...

Read all of our Wedding Coordinators Reviews at